Minneapolis’ innovative Downtown 100 program has been recognized as one of the top ten best criminal justice programs in the country, after the program led to a 74 percent decrease in crimes committed by top offenders in downtown Minneapolis.

The Downtown 100 program was recognized at the Innovations in Criminal Justice Summit, which is hosted by the Association of Prosecuting Attorneys, in partnership with the U.S. Department of Justice’s Bureau of Justice Assistance. The summit highlighted 10 innovative criminal justice programs from across the U.S.

The Downtown 100 program started in April 2010. By the end of the year, the new partnership between local government, business, non-profits, and the community led to a 74 percent decrease in crimes committed by top offenders in downtown Minneapolis. By working together, the partners focus on the most chronic livability, property, and drug crime offenders in the Downtown area through prosecution, probation, social services, and housing. 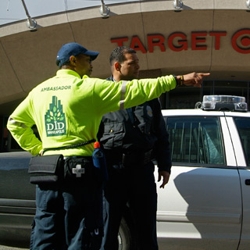 The Minneapolis Police Department provides lists of top offenders based on crime statistics, and all the partners work together to reduce the chances those people will continue to reoffend. Livability crimes they’ve been involved in often include drug offenses, theft, trespassing, and disorderly conduct.

Crime reduction
In addition to a 74 percent drop in crimes committed by the top 50 chronic offenders in the Downtown Improvement District, crimes committed by those individuals in the greater 1st Precinct dropped 77 percent, and were down citywide by 27 percent. That means those crimes were prevented, not displaced to another part of town.

Probationary tools
Chronic offenders on probation commit fewer crimes than unsupervised offenders. In the first year, 70 percent of offenders had active supervision by a probation officer, and 70 percent also had geographic restrictions imposed that barred them from Downtown.

Downtown Court Watch
The members of the partnership, including representatives from all of the 1st Precinct neighborhoods, gather monthly to share information on crime and to make recommendations for dispositions on upcoming cases for top offenders. The Downtown Court Watch received an award in 2009 from the International Association of Chiefs of Police for the Best Community Policing Plan.

Social services
Obtaining social services for chronic offenders is also key in reducing crime, and those services include things like chemical dependency and mental health services, along with employment assistance. In the first year, 36 percent of offenders were provided with chemical dependency services, and 32 percent were provided with mental health services.

Housing
Another way to reduce crimes committed by chronic offenders is to assist them in obtaining housing. Fifty percent of the top offenders had or obtained a home during the program’s first year, compared to 20 percent at the beginning of the program.